what happens During a Craniosacral THerapy Session & how can it help?

During a session you will remain fully clothed on the massage table while light touch is held at various contact points on the body. Contact points may include the cranium, sacrum, feet, knees, hips, shoulders or back for example. During a craniosacral session your comfort is always prioritized.

Craniosacral therapy helps to quiet the mind and relax the physical body. During a session, you may develop an awareness of subtle movement in your body as patterns of tension unwind. Your breath may lengthen and sometimes unique visual imagery is experienced. It is common for you to move into a theta or alpha brainwave state during a CST session. Following a session, it is common to feel great peace and clarity as well as reduced physical symptoms. 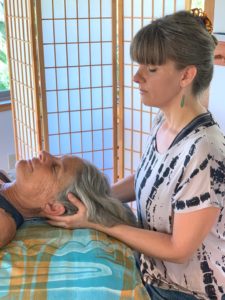 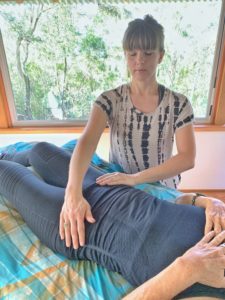 Craniosacral therapy, also referred to as cranial sacral therapy, has its roots in Osteopathic Medicine as founded by M.D and surgeon, Andrew Tayor Still (1828-1917). Osteopathy was Dr. Still’s response to the medical practices of his time, which he viewed as both harmful and inadequate at addressing the underlying cause of illness. Dr. Still advocated that the body itself is its own wisest physician, and that the role of physician should be to support the innate capacity of the body to heal itself.

Dr. William Garner Sutherland (1873–1954) was a student of Dr. Still who followed in these philosophical footsteps and developed what he called the Cranial Concept. Through much study and unique self-experimentation, Dr. Sutherland proved that the bones of the cranium have movement, and they are not tightly fused-together fixed structures that the Western doctors  of the time believed them to be.

During his career, Dr. Sutherland refined his palpation skills and discovered that gentle biomechanical cranial adjustments could alleviate a myriad of health concerns for his patients. Throughout his life, he developed a profound interest in the way we relate with the mysterious messages of our bodies. This included the fluctuating movement of fluid in our body and the role that this fluid movement plays in our capacity to auto-regulate for optimal health. Cranial sacral therapy techniques are now taught to licensed massage therapists and bodyworkers, making the work accessible to a wider range of practitioners and patients alike.

Dr. Sutherland spent the first 30 years of his career researching, teaching and developing cranial manipulation techniques. In the last ten years of his practice, he discovered that he no longer needed to physically “adjust” anything in order to help his patients. He realized that by maintaining a certain quality of presence while working with patients, their bodies would begin to do their own self-healing adjustments and they would begin to feel better.  Sutherland acknowledged that there was a larger, mysterious force tending to the way in which our body self-organizes. Following his death in 1954, Dr. Sutherland’s students continued to develop the principles that guided his later work. This work would eventually be referred to as Craniosacral Biodynamics.

Biodynamic Craniosacral Therapy and the biomechanical Craniosacral approach are different techniques in theory and application. Each technique has its own unique value.  Both are very gentle and emphasize deep listening. Both techniques are highly supportive for the central nervous system and result in therapeutic change.

I am constantly amazed by the healing potential unlocked during this seemingly simple work. In the still spaciousness that is created by “listening carefully without intending” the body can remember its own treatment plan and begin to correct that which is necessary. I invite you to experience this beautiful work with me, and I hope you will fall in love with it as I have. If you have any questions, please call 503-922-3233 (landline, no text) or click below to book an appointment.